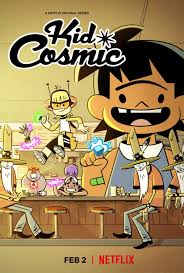 Courtesy of Netflix Under Fair Use

Craig McCracken's 'Kid Cosmic' is available on Netflix. It currently has 10 episodes that usually feature comedic sequences and action scenes with important elements to character arcs and plot points baked into the events of the episodes.

On Feb 2, 2021, Craig McCracken, creator of “Wander Over Yonder”, “The Powerpuff Girls”, and “Foster’s Home for Imaginary Friends”, got to see his latest cartoon creation, “Kid Cosmic”, debut on Netflix.

The show uses an aesthetic akin to old timey comics such as early Superman and the comic strips you would find in a newspaper. This all contributes to the show and creator’s desire to emulate nostalgia and childhood wonder.

Kid, wanting to be a superhero and building his expectations as to how having the stones will affect his life, allows the show to explore how sometimes when children – or people in general- have idealized expectations of something they want, the realities of what they want can cause them to be defensive. This is exemplified in how Kid reacts to the failures he encounters, and in how he interacts with his four-year old neighbor, Rosa.

In the very first episode, Kid attempts to unlock the supposed powers of the space stones– or Cosmic Ring of Power, as he calls it. He tries various things to activate the ring while on video, different code words, power moves, and even some alien languages from his superhero comics.

None of these work, and Kid has a bit of a temper tantrum, tearing up his testing site on camera. We see from the film that he returns to the site later, to apologize to “the people of Earth”. He explains that he often gets angry easily, but reassures his supposed audience that he has means of calming himself and getting better thanks to his grandpa, Papa G.

This scene not only communicates its characters reacting to disappointment, but dealing with the emotions said disappointment sparks in them.

It helps that these themes are communicated using a child using advice from an adamant parental figure and role model of theirs. This allows children, the target audience, to get an example of a good role model and how it should affect them.

What really drives everything home is that when Kid calms himself using Papa G’s advice: “Freakin’ out? Breathe it out,” Kid unlocks the green Cosmic Ring’s power of flight.

Jo, a teenager and one of Kid’s friends from town, also learns a similar lesson. Jo desperately wants to escape the small town she grew up in with her mother and her mother’s diner, in which Jo is employed. Kid’s approaching her to talk about the power rings and wanting her to join his superhero dream team, is what Jo sees as the perfect opportunity to fulfill her dreams of travelling outside of her hometown. This dream of her’s makes it even more appropriate that Jo’s ring is the purple one, whose power is portal-opening.

Jo is disappointed with the outcome of her ring powers as well. As stated earlier, the rocks Kid used for his power rings are at the center of intergalactic conflicts that hold the potential to destroy planets and spark cosmic war. When Jo learns this from the alien who followed the stones to Earth, she freaks out and abandons Kid and the idea of being a cosmic hero.

Jo has a change of heart when she discovers that Kid feels like her, as though all they’ll ever be is nobodies from a nowhere town if they don’t take any big opportunity to be great. Once Jo and Kid reconcile, they officially team up.

Peace has not been achieved however, just because Jo and Kid managed to vanquish a couple of alien invaders. Especially not since Rosa, Kid’s neighbor, has gotten a hold of the blue ring, which grants the user indestructibility and the ability to turn into a giant version of themselves.

Kid’s resentment of Rosa becomes greater and more apparent now that she has made trouble for him that is of a much greater scale. This trouble includes: smacking Kid out of the sky, risking the rest of the town discovering Kid and Jo’s alien shenanigans, and worst of all, freeing the alien Kid and Jo trapped.

The alien– now known as Stuck Chuck because of the nature of his first defeat– escapes thanks to the help of an oblivious giant Rosa and steals the rest of the rings of power, donning the yellow ring and gaining its ability to produce multiples of oneself.

Rosa, again oblivious, takes the rings back briefly in a game of keep-away, but drops them again when Kid berates Rosa for taking his things. He yells at her that she is not his friend, leading Rosa to run away crying.

Despite Kid’s meanness, Rosa returns, saying “Maybe you’re not my friend, but I’m your friend.” This allows Kid to get over himself and become more accepting of Rosa.

The newly expanded crew beat down the alien clones and capture Stuck Chuck again. Papa G is also there to help with his newly found yellow ring of power.

Once again, Kid is able to overcome his mistakes and flaws thanks to help and support from friends, family, and sturdy role models. This, of course, is great to show to children because teaching children self-reflection, how to have healthy expectations for their loved ones– people that are willing to support you and call you out when you mess up–, and how to handle disappointment and subverted expectations. The episode ends with Papa G and Rosa as new additions to Kid’s team, and with Kid hiding the fifth and final cosmic ring with Tuna Sandwich, the cat. The red ring is able to grant its user with precognitive powers . . .

Kid learns again and again in these first episodes how to be open to subverted expectations, and that not everything is like the comic books.

Kid Cosmic has a unique style and light-hearted tone, for now it seems anyway. It is implied several times in the first episodes that Kid has a rather depressing backstory as to why he only has his grandpa to raise him, and why he has a rather large scar on his stomach.

I recommend Kid Cosmic if you are a Craig McCracken fan such as myself, a cartoon fan in general (again like myself), or if you are just looking for something simple and wholesome to enjoy.